In 1997, a three-year Fellowship Program was established at the University of Delaware/Winterthur.  While the Columbia Scholarship Program provides four sectors relating to preservation (design, history, conservation and planning), the Winterthur Art Conservation Program provides an education in archival care and conservation, restoration and proper storage of art, artifacts, and antiquities. Our recipients are chosen from those students already accepted into the master degree University of Delaware/Winterthur Art Conservations Program. To date, 8 fellows have received funding through International Questers.  (See the Powerpoint Presentation below for information on each of those fellows.) 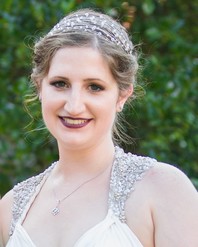 Joanna states, “After seven years of pursuing my conservation career path, I wake up every morning with a drive to aid in the preservation of both cultural and personal histories.  Thank you for supporting my graduate education.  I am honored and grateful to be chosen as your Winterthur 8th fellow .  It is fun to search and a joy to find.  And I am eager to continue my pursuit of both with your sponsorship.”

What an incredible year! I cannot begin to tell you how much it means to me to have your support, but I will try my best. You have enabled me to fulfill a decade’s worth of dreaming and hard work. To show my immense gratitude, I would like to tell you about the amazing things you have helped me to do.  Do you know about preventive conservation? I had always thought it was simply enacting environmental and housing standards to prevent damage rather than treat the damage after it happened. However, one of the many things I learned this year is that there is absolutely nothing simple about it. My academic year was sandwiched by blocks of instruction in preventive conservation. It proved to be the perfect envelope for the topics in the middle because it introduced and then summarized principles that truly apply to everything. I was thrilled to bring this new knowledge to Central High School in Philadelphia for a collections assessment survey. You may be surprised, as I was, to learn that Central High has a wonderful collection of Oceana/Africana art. My class and I spent a day conducting an on-site survey aimed at recognizing current strengths and weaknesses of the collection storage. But I am keeping my fingers crossed that it won’t end there! In the coming year I am hoping to return with my Preventive Major classmate, Melissa King, and our instructor/new WUDPAC Associate Director, Joelle Wickens, to train alumni, staff, and students on proper handling and housekeeping. Central High is so passionate about caring for its collection that we just couldn’t waste the opportunity to work with them again and get students more involved and excited about cultural heritage. Even the offices of Central High School were decorated with prints and photographs, all part of their impressive collection.

The center of my academic sandwich was filled with protein, cellulose, synthetics, and surprises—an expertly balanced meal! Some of my favorite moments include working as a class to bathe an oversized cotton coverlet in textile block and experimenting with different bathing techniques during paper block. I am realizing as I write this that it is no surprise I chose paper as my major given my love of bathing cellulosic materials. I was able to experience two separate emergency response training sessions, one in preventive block and another in photo block.  I was equally surprised by the magnitude of my emotional response to seeing the objects in distress, even though the scenario was planned. Practice makes perfect, so while I will never wish an emergency on any one or any collection I will take every opportunity to improve.

Perhaps the biggest surprise of the year came from my wood block project. The documentation project I shared with my classmate, Lindsey Zachman, was based around a seemingly modest cabinet. However, it turned out to have possibly held Thomas Jefferson’s petit-format library! Jefferson’s workshop was known to have used distinctive joinery for the shelves, but the joinery was covered by pieces of plywood added at an unknown date. After the block was over, our instructor, Mark Anderson, was able to remove the plywood revealing that the joinery was consistent with Jefferson’s workshop and that the plywood was actually scrap from a cigar box! So many questions left to answer but we were all extremely happy to answer the question of joinery.

And these are just the highlights!  Should anyone want to hear ad infinitum about my previous year and upcoming excitement or to explore the beautiful gardens and exhibits at Winterthur, with or without my commentary, please come visit! I would love the opportunity to share the world to which you have granted me access.

Alexa Beller, Questers Fellow, working on Delacroix mural.
Alexa Beller, our Questers Fellow # 7:  Alexa is a 2013 graduate of the University of Illinois at Urbana-Champaign where she majored  in History and Painting with a minor in chemistry.  Alexa is now working toward a Masters Degree in Art Conservation at Winterthur/University of Delaware.  She is in her third year and is scheduled to complete her studies in May 2017.  A report on her work at the Saint Sulpice chapel in Italy this summer is included below.  She was also featured in a recent issue of Antique Week, which is included below her summer report.

2016 Summer Report: Murals in Paris at Saint Sulpice
My summer experience in Paris was absolutely incredible!

I had never been to France before but had taken French language classes through high school and into college. It was a little overwhelming to go to a new country and intern for eight weeks, but the exciting prospect of working on two beautiful wall paintings in Parisian churches far surpassed my anxieties.

My first project was in the church of Saint Sulpice in the 6th arrondissement of the city. The church is known as the second largest church in Paris (just slightly smaller than Notre Dame) and the present 17th-century structure located on the site of a 13th-century church. The church is extensively decorated with paintings in each of its 19 side chapels. It is also known at one of the sites featured in the book and movie The Da Vinci Code.

The project at Saint Sulpice focused on the Chapel of the Holy Angels painted by Eugène Delacroix (1798-1863) between 1849-1861. His work covers 2 ½ stonewalls and a canvas adhered to the domed ceiling (in total nearly 660 square feet of painting). Delacroix was a famous and avant-garde artist of his time. He rejected the formal art education process in France and is regarded as the precursor to Impressionism and modern art movements. Conservation of Art Works Religious and Civil (CoARC) under the umbrella of the Paris city government headed the restoration of the chapel. Although the building is still a functioning Catholic church, CoARC is responsible for the research, care, and maintenance of buildings and historical works within the city (religious or otherwise). The chapel had undergone many restorations (in 1895, 1934, 1943, 1946, and 1976) and has sustained many years of water damage from a leaky roof.

Before I arrived in June, the roof above the chapel was repaired and the team of ten conservators at Saint Sulpice began researching Delacroix and the painting including conducting scientific analysis to discover his painting technique and materials as well as the previous discolored restoration materials. Winterthur/University of Delaware professor and conservator Richard Wolbers made multiple visits to consult on how to safely clean and preserve the complicated paint surfaces. Delacroix had used a varied mixture of oil paint and wax to obtain a very matte surface, but this was obscured by later additions of paint and varnish by subsequent restorers. We removed the disfiguring paint and varnish, filled the losses in the paint to the same level as the surrounding original paint layer; later in September the team will retouch the losses to better match the surrounding paint.

I’m so grateful for the opportunity to research, intern, and travel in Europe this summer! I worked with beautiful artworks, made French friends in my field, and saw artworks, buildings, and monuments that gave me a wider understanding of French art and culture. I will definitely carry this experience with me through the rest of life and look forward to sharing my next adventures in Boston with you all!  (I started my internship at the Isabella Stewart Gardner Museum on September 6 and will be writing about my experiences there in my Fall report.)

Download File
Alexa shared the following details from one of her projects last year:
The first was a painting by Grandma Moses called Wood Interior (1940) that had flaking paint. The treatment proved to be challenging because although the owner and gallery believed the paint to be oil paint, it reacted highly sensitively to solvents and water. I analyzed two paint samples at Winterthur’s Scientific and Research Analytical Laboratory and found that the paint was actually a mixture of binders (protein, oil, and resin). Since the materials proved to be very untraditional and because I wanted to learn more, I took a road trip up to Vermont and upstate New York to interview friends and family of Grandma Moses and see her studio materials and other paintings at the Bennington Museum and Shelburne Museum. I was able to see the stencils and tracing paper she used to transfer motifs from prints and illustrations to her paintings.

One very interesting aspect of the treatment was the odd composition of the painting. It featured figures and a horse running, but with seemingly no reason for them to be fleeing. I contacted Grandma Moses’ representing gallery, Galerie St. Etienne, and asked them about the possibility of a painting that’s the same height on Masonite board from the early 1940s, which may feature a fire or something to cause the figures to run. They directed me to a painting called Fire in the Woods, which lined up perfectly with Wood Interior when I placed them together in Photoshop. The other painting disappeared into a private collection in 1973 and has not yet been located. This was a fascinating project to work on and I was able to present my work at the ANAGPIC (Association of North American Graduate Programs in Conservation) at the Harvard Art Museums in March.