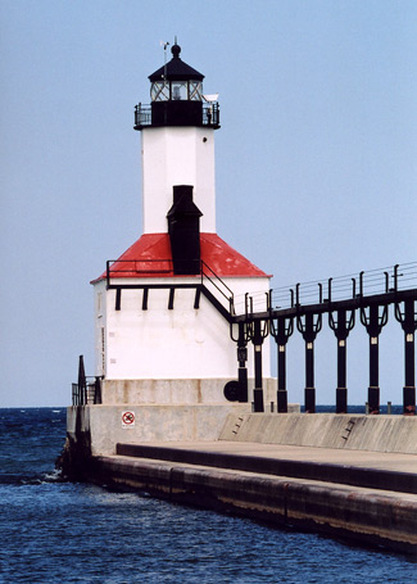 In 1963, Lighthouse at Michigan City, Indiana was one of the earliest P&R grants to a chapter.
THE HISTORY
From  Quester Quarterly Volume XLII, Number 1, Fall 1991, p 1.

When did Quester Preservation and Restoration begin? In 1956, when The Questers numbered only 25 chapters, there was a desire for a national preservation project. Using 10 cents per member, $270 was granted for flood restoration in Sturbridge Village, Massachusetts.

Another early gift was $1,500 to the National Trust, the first of many to that organization. With that, the balance in the P&R fund was $62.28. By 196l, the allotment of 25 cents per member from the $1.50 dues allowed The Questers to contribute to the White House for the purchase of glass for the Red Room and to Independence Hall for restoration of the first floor.

From 1961 to 1963, chapters contributed specific pieces of furniture for the Martha Washington Lobby of the Freedom Foundation in Valley Forge, Pennsylvania. There were quality reproductions arranged to resemble a common room of an inn from the Revolutionary War period.

In 1963, Marquette #139 was granted $1,200 from the National P&R to restore the 1958 light house at Michigan City, Indiana. It was one of the first instances of Questers on the local level responding to a community project. Shadows-on-the-Teche, Louisiana, also received funds. If a member knows the current status of this project, they should contact Headquarters.

From 1964 through 1972, The Questers' P&R funds were directed toward the selection, purchase and restoration of a permanent headquarters building. The incorporating papers required that The Questers maintain a Pennsylvania location. After the death of founder Bess Bardens in 1964, the Bardens Memorial Library required a home. The small 1802 house on Quince Street was purchased for $24,500, a tidy sum in 1967. With careful management and Quester generosity, the mortgage was repaid within two years.

By the 1970's, Questers went back to giving money away. In 1971, the Quaker school restoration on the Herbert Hoover complex in West Branch, Iowa, received $1,000. That same year, another $1,000 was given for furnishings in the 1855 Tallman House in Janesville, Wisconsin.

In 1972, the National Council adopted the policy of permitting each President, while in office, to recommend to the National Board, with approval of the National Council, a national preservation and restoration project to be financed by a portion of the dues in the national P&R funds. Thus, Janet Holley established the highly successful graduate scholarship program at Columbia University. Following the initial P&R gift of $2,500 in 1974, this became a permanent, self-supporting project.

How did the Grants Program Begin? During 1974-1976, the Bicentennial era, The Questers saw a flurry of applications for the first matching grants for P&R. At that time no grant could exceed $500 and had to be matched by the chapter. Gifts as small as $25.00 were presented. Nearly 9,000 were given to forty-six chapters, with an additional $3,500 given to the entrance hall of the Yerkes House, Mill Race Village, Northville, Michigan. A special grant of $8,000 went to the documents room of the Second National Bank in Philadelphia. All of this was accomplished under the directive of then president, Margaret Walker.

During the next two years, 1976-1978, the balance, $13,228, was given to the thirty-eight chapters that did not receive the original Bicentennial awards.

In 1978, an additional $10,000 donation was made to the National Trust toward their new "old" headquarters at the Decatur House in Washington, D. C. As interest and money increased, the need for more organization became apparent. The policy was adopted that permitted the National President to recommend to the National Council a plan for use of the P&R funds during each year of her two year term.

In 1980, $10,000 was given to the Campbell Center for Historic Preservation in Mount Carroll, Illinois. It was established in 1979 as a national center for the training of experts in the expanding field of preservation. Mary Lee, the current director, states that they continue to train about one hundred students a year, have recently received a grant from the National Endowment for the Arts, and have a contract with the National Park Service.

In 1980 and 1982, the country was divided into six geographic areas and the matching grants awarded according to Quester population in each section. In 1980, applicants divided nearly $10,000. In 1982, twenty-six chapters applied and eleven received a total of $5,000.

By the 1980's it became apparent that The Questers' 180-year-old Philadelphia headquarters was in dire need of major repair. All the monies from the 1984 P&R budget were allotted to preserve the building. The additional bank load of $22,500 was retired by August, 1985.